Many Florida small businesses would be harmed by a $15 Florida business minimum wage, which would result in a significant increase in labor costs and a doubling of the price of entry-level positions. 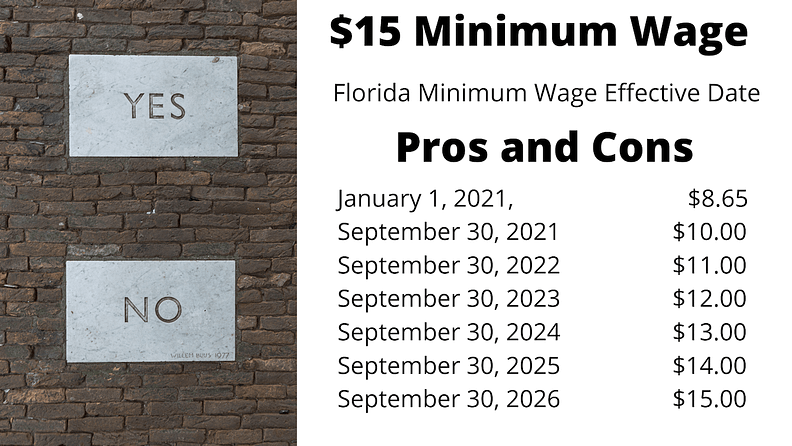 According to a recent survey, a vast number of small businesses (74 percent) believe that a federally mandated $15 minimum wage would hurt their bottom line. One argument for the increase in the state minimum wage by voters is the minimum wage hike is suitable for Florida’s economy.

The common belief is that increasing minimum wage requirements will help create a “living wage” and create more economic opportunity.

Wages are a crucial “price” in the economy because they influence how labor produces goods and services.

According to basic economic principles, the more a product or service costs, the less likely it is to be purchased in large quantities. This concept is a market law that no government can change in any economy. This law is also valid in terms of labor.

Business owners will have to figure out how to pass on and reduce labor costs through price increases or job losses to stay afloat.

Why Are Some Businesses in Favor of Increasing the Minimum Wage? 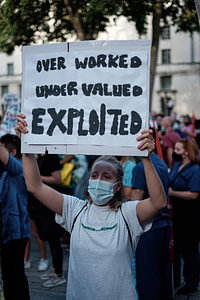 Employees who make more are generally happier at work, are less financially stressed, and are more likely to stay with a company for the long term, lowering turnover and recruitment costs.

In theory, employees with more experience will always provide better service or perform better than those new to the company.

How Will a Minimum Wage Increase Affect Small Business Owners?

Increases in the minimum wage of just $1 an hour can cost small businesses tens of 1,000s dollars in additional payroll costs each year, eroding profits.

They are fully mindful of this.

According to the same third-party survey of 500 small business owners nationwide, 14% anticipate laying off employees if and when their state’s minimum wage increases.

A Miami small pizza parlor with ten employees earning $10 per hour on average and working 2,000 hours per year has a total payroll of $200,000.

The remaining $165,000 covers rent, utilities, and the owner’s income after deducting labor costs. A $15 state minimum wage would mean a $5 increase per hour in labor costs, totaling $100,000.

A $15 minimum wage increase would almost certainly bankrupt the company, leaving the owner with the difficult choice of closing the business or drastically altering operations to absorb the increased costs.

If the employer decides to keep it open, the cost-cutting options are limited, and none are good. Although laying off one worker saves $30,000, the job opportunity is lost forever, and the employee’s income from that position is zero.

Three fewer employees would save $90,000 in labor costs, but could seven people still make 100 pizzas per day? The owners could also reduce employee hours, but this would create the same problem.

The owner could save money by using less expensive ingredients or reducing the number of ingredients, which would degrade the product’s quality and jeopardize customer loyalty.

To compensate for the loss, raising the price of pizza might help, but would fewer people choose pizza now? A $3 increase per pizza could be sufficient if the higher price does not deter customers due to competition from larger pizza companies with lower profit margins.

The owner may also put a moratorium on future raises for the most productive or experienced employees, resulting in wage compression and a drop in employee morale. The owner could also accept a lower salary, which would detract from their motivation to start the business in the first place.

To varying degrees, all of this will take place. If Florida voters were given this scenario with the ballot initiative, would it still pass and become Florida law?

Why Raising Minimum Wage is Bad

Among the South Florida employers who stated that higher minimum wages would harm them; 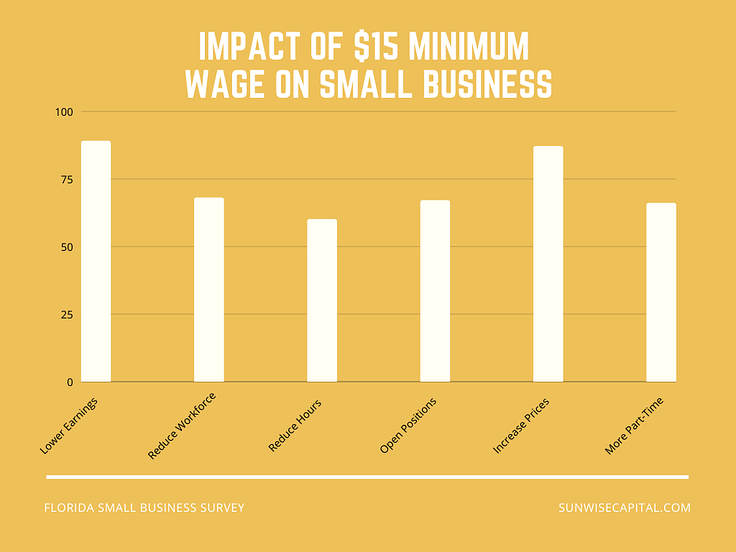 The owner of multiple hair salons on the west coast of Florida claims that the coronavirus pandemic had a financial impact on her company but that the economic shutdown itself had no effect.

“We had a fantastic 2018 and 2019. It was amazing to have so many customers and stylists in one place. The small business owner asked to remain anonymous and owns several salons.

“After COVID hit, we had to close for eight weeks. The fact that I live in Florida helped to alleviate the situation. “We had 97 employees when we closed,” she continued.

Only 50 people showed up when we reopened.” This owner had to make a tough decision. She decided to close three of her twelve salons due to a lack of qualified employees.

According to the native of Tampa Bay, the most difficult challenge is re-engaging people in the workforce.

“We had only 70 employees when we reopened 15 months ago,” she explained.

For this entrepreneur, who owns several salons in the Tampa Bay area, small business assistance programs have impacted Florida and small business owners throughout the nation.

The woman explained, “I make half of what I’ve made.”

Her son, who is in charge of recruiting for the salon franchise, claims he cannot get people to show up for interviews despite paying stylists more than the minimum wage in the industry.

She says that her stylists earn between $10 and $14 per hour plus tips in her salons.

At the time of writing, Florida Gov. Ron DeSantis had chosen to opt out of the federal Pandemic Unemployment Compensation program, denying unemployed Floridians a weekly payment of $300 in compensation.

However, the governor’s “Return to Work” initiative has not successfully filled job vacancies across the state.

“They’re staying at home because they were able to obtain Medicaid. The amount of food stamps available to those who do not work is higher.

Because you can’t evict people anymore, they’re getting free rent.”

The eviction ban will be in effect until October 1.

Some members of Congress expressed displeasure with the President’s decision to extend the moratorium, saying it lacked “both legal and economic justification.”

Amendment 2: What is it and why is it wrong for Florida?

The Florida Chamber of Commerce states, “Amendment 2: Bad for Florida, Worse for Floridians.”

Florida becomes the first state in the country to enshrine a $15-an-hour minimum wage in its state constitution. Many argue this wage raise ensures that the jobs lost to the pandemic will be gone forever.

The argument goes on to say that the virus has harmed businesses may never recover.

This action will stifle Florida’s economic recovery and harm the very people who the proponents claim it will help.

Who are the people who will be most affected by Amendment 2?

The Chamber says that working Seniors and fixed-income families suffer as Amendment 2 is essentially a tax increase because it raises inflation and drives up the cost of living. Not only that, it forces seniors and families who work to pay more for essentials like groceries, clothes, and personal grooming.

The most important industry in Florida is tourism. During COVID-19, tourism-related businesses on average laid off 73 percent of their staff over three weeks.

The mandate imposed by Amendment 2 will significantly impact these jobs, as many attractions, hotels, and restaurants will reduce capacity.

Employees on the Minimum Wage:

The minimum wage sets a productivity standard for businesses, requiring them to shift to more experienced workers. As a result, entry-level jobs will be scarce, limiting job training and opportunities for students and those looking to re-enter the workforce.

Amendment 2 hastens job automation, causing people to lose their jobs. Part-time workers will experience the most significant cuts in paid hours and perks as many businesses relocate operations to adjacent states to seek experienced workers at a lower cost.

Every dollar raised in the minimum wage is paid for by someone else, and in the case of small businesses, it is frequently not those who can “afford” it.

There is no change in total income or expenditures.

Like it or not, in every game, there are winners and losers.

Customers pay for the higher minimum wage through higher prices, lower profits for small businesses, lost income for those who lose their jobs, and shortened hours. Other losers are those individuals who want essential work experience but are having difficulty finding employment.

A hike in the minimum wage affects all of them significantly.

Take Your Business Further With A Loan From Sunwise Capital

Apply in minutes to get funding

Checking eligibility will not affect your credit score

Give us a call! We’d love to chat.